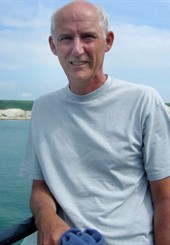 On leaving school I joined the Plymouth firm of Woolland, Son & Manico, Chartered Surveyors as an articled pupil, and enrolled on a postal course with the College of Estate Management, University of Reading.  I duly qualified as a Chartered Surveyor and following a number of years experience including a short spell in Bristol I joined the family firm of Viner Carew.  Working my way up in various roles I joined the partnership in 1977.

In 1975 I married Judy (nee Knape), ex head girl at St Dunstans Abbey School (she left school in 1971) and we now have three married children and five grandchildren.

Following the sale of my business in 1992 I spent some time with the District Valuer and after eight years with the Land Registry I retired in 2008.

During my working life I had various roles in the Port of Plymouth Junior Chamber of Commerce and was Chairman of the Devon & Cornwall Junior Branch of the Royal Institution of Chartered Surveyors and Chairman of Plymouth Round Table.

My family has had a long association with Plymouth College; my great uncle attended (Vivian Ager), as did my father (Raymond Viner), my uncle (Duncan Viner), my uncle (John Square), my brothers (Michael and David), my cousins (Richard and Anthony Square - Anthony being in the same year as myself and who also attended the re-union), my nephews (Christopher, Stephen and Paul Viner) and my niece (Rachel Viner). My wife's uncle (Alan Scott) and his son (Mike Scott) attended as did my wife's brother-in-law (ex OPM President, Bob Foulkes) and his son (David Foulkes).