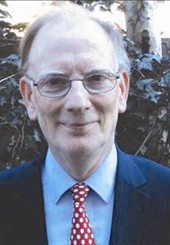 I spent four enjoyable years at the University of Saint Andrews where I studied for an MA degree in English Language and Literature. On leaving university I embarked upon a career in teaching. I married Jane, a fellow teacher, in 1976.  Having held positions of responsibility in a number of schools, I joined Holy Trinity International School in 2007 where I am Head of Sixth Form and Head of History.

I have a strong interest in internationalism in education and have led school parties to Germany, Denmark, Estonia and Serbia. My own travels have taken me to Burkina Faso in West Africa where I helped to support an orphanage. Since the beginning of 2012 I have had a major role in Britain’s Emerging Talent, an initiative founded by television presenter Melissa Porter to raise awareness of apprenticeships.

Jane and I live in Solihull, in the West Midlands, where Jane is Head of Saint Martin’s School. In my spare time I enjoy watching cricket at Edgbaston, flotilla sailing, and playing golf throughout the year.